Last week Verizon Wireless announced the true successor to the popular LG enV (VX9900), the LG enV2 (VX9100). I was wrong to have previously concluded that the LG Voyager (VX10000) was the replacement. The Voyager seems to have been a “premium” version of the enV meant to take on iPhone sales, while the compact and affordable enV2 remains in the same class as the original. When the VX9900 originally was released it was quite a robust and powerful phone featuring the latest technologies, however the enV2 doesn’t seem to have any revolutionary features. The phone seems to be merely a simple upgrade to its predecessor with a new user interface, a compact body, a better build quality, and other minor improvements. There’s plenty of good and some bad, so lets get started.

LG enV2 Body: 4/5 stars
The enV (VX9900) was a more compact version of the LG V (VX9800) and now the enV2 is even smaller. The phone is quite small and can fit in just about any pocket. It’s a bit heavier than I had imagined (4.23 oz), but it’s still lighter than the enV. The enV2 is a whole lot shorter and thinner than the enV, however it is slightly wider. Both the front and back are pretty flat and all edges are smooth and rounded. It’s a pretty good looking phone and is easy to handle as well. On the front you’ll find a tiny display at the top and improved numeric keypad right below. The backside of the phone has the removable battery and the 2.0 megapixel camera. The right side of the phone has the 2.5mm headphone jack and microSD card reader/writer while the left side has the volume toggle keys and the camera button. As for the inside of the phone, the top portion features the 2.4-inch display with stereo speakers on the sides and the bottom portion has the QWERTY keyboard. And finally a micro-USB port can be found on the bottom under a socket cover for charging and data transfer. The only thing that I found disappointing was the extremely small screen on the front which has been rendered almost entirely useless. I feel that there would have been more to gain by making the keypad a bit smaller and by adding a larger screen. 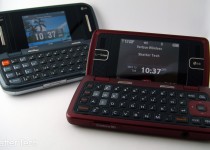 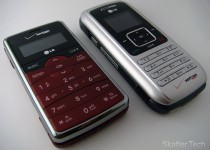 The Screen(s): 4/5 stars
In terms of brightness and colors, both the internal and external displays are top notch. The internal screen is much bigger and brighter than the one on the enV. It looked quite good especially when I was able to view images I had taken in a full screen mode, which the enV didn’t allow. Watching videos on the internal display was quite decent as well. The external screen is now a rectangular strip which doesn’t offer enough room to perform most tasks. The external display on enV was more of a square and it’s menu system was quite fulfilling. Both screens were bright enough to be visible in direct sunlight.

User Interface: 4/5 stars
After messing with the internal interface of the phone I’ve got to say there’s a lot of improvements. Everything was quick and easy to learn and use. The interface will be quite familiar for previous enV owners. The phone also offers a layouts for messaging or multimedia, in case you plan on using one or the other more. I personally opted for the standard menu interface. Some of the stylish curves seems to have eaten up some screen estate which could have been used for displaying more information, however it wasn’t a problem. Overall the internal interface has been improved and works smoothly. The main fall back of the phone would have to be the external interface which I feel is a disaster. First off to get into the interface you’ll have to unlock the keyguard using the OK button. Next since there are no true soft keys, the up and down buttons launch the your contacts and message, respectively. The clear key which is usually centered on most phones has been placed at the top right which was quite awkward to use. The top left button is now the ‘Music’ button which should have just been one of the two customizable soft keys. The contacts list can only display two contacts at a time, however you’ll survive since it has a search function. The phone allows sending a text messages from the tiny front display, however the interface is confusing and slow. Even viewing ‘recent calls’ was quite tedious. If LG had offered a larger display and Verizon had built a better interface this would have had potential.

Media Playback: 4.5/5 stars
The interface for playing back music on the enV2 is pretty much the same as what it was on the enV. There doesn’t seem to be too many changes. I do however feel that it is about time that the player got a new look. Despite that caveat, the has and continues to player run without any problems. For those who have not used the interface on a previous phone, it allows searching or browsing by Songs, Albums, Artists, or Genres. It supports MP3, WMA, and AAC formats. It’s good news for both iTunes Plus and Amazon MP3 customers since all that content will be compatible. The V CAST Video also has been improved, streaming seems to function smoother than before and there wasn’t as much frame rate drops as there was on the enV. If you want to add your own video clips onto the phone, you can do so easily using 3rd party software and converting the content into WMV, MP4, or 3G2 formats. MicroSD + Syncing: 5/5 stars
The LG enV2 doesn’t have too much room for storing content on it’s internal memory, however it has a microSD expansion which solves the problem. The phone now supports up to 8GB microSD cards, which should be plenty for the majority. Syncing music onto the phone is also a cinch. You can either use a micro-USB cable and sync content using a program such as Windows Media Player 11 or use a microSD card reader to copy content into the automatically created folders on the card. Even those with limited computer knowledge should be able to figure it out easily!

Speakers & Headphones: 5/5 stars
LG has once again improved the speakers on the enV2, making it better than those on the enV. I’m glad they improved on this, I was worried after I heard the speakers on the expensive LG Voyager. The speakers are clear at even full volume and manage without beginning to crackle. The sound great both for listening to music and when used as a speaker phone. If you plan to use headphones you’ll need to purchase a 2.5mm to 3.5mm converter to use with standard headphones. Listening with headphones will satisfy the average consumer, however don’t expect top notch music playback out of this phone.

Digital Camera: 4.5/5 stars
The main improvement in the digital camera on the enV2 would probably have to be the speed it takes pictures at. The enV constantly lagged and it often took forever for the camera to focus, snap, and save the image. The enV2 acts almost instantaneously. There are few disappointments with the enV2 such as the loss of the build in flash, which made a big difference for closeups taken in under-lit situations. The camera is also still a 2.0 mega pixel which was the same as what was on the enV, so no improvement there. And finally the lens cover has also been removed leaving the camera exposed. The video mode functions smoothly as well, there were no problems there. The front screen can be used to take photos and can also be used for self portraits when flipped open, however due to the small screen size, only a small strip of the full image will be visible. Overall the enV2’s camera functions as it should with some speed improvements, however the camera hasn’t been upgraded and there are no new features. 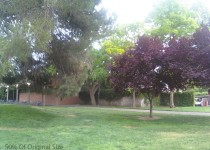 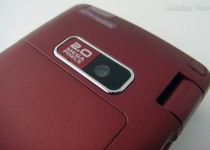 GPS VZ Navigator: 5/5 stars
I have to mention this feature, since it is one of my favorite part of Verizon Wireless phones. The VZ Naviagor, now on version 4, now includes tons of new features including traffic alerts. The interface is quick and easy to use and the phone can detect your exact location in a matter of seconds. It’s actually much more accurate than the locater on the Apple iPhone. The application will be an addition to your monthly bill unless you have a premium plan. The maps offer live turn-by-turn directions with voice overs which actually state the street names. Address can be saved into the phone. The local search can help find businesses or restaurants instantly. The program also displays the phone number of the address and can dial the number for you. And finally it can lookup movie showtimes near your location and assist in booking tickets. The new version also locates the cheapest gas in near your location.

Messaging (IM, Email, & Text): 5/5 stars
This is a great phone for those who message a lot. It’s got a built in chat client which supports AIM, MSN, and Yahoo!. The software now allows viewing your full contact lists, which was previously limited. The new Mobile Email client supports Yahoo Mail, Windows Live Hotmail, AOL/AIM Mail, and Verizon. If you use another provider, you can just enter the POP3 or IMAP servers and it should work perfectly. The Email Client also can be setup to notify you each time an email arrives in any of your inboxes. The text messaging component is vastly the same, but there are some improvements. The inbox and outbox is no longer limited to 50 messages. (In addition the phone can now hold 1000 contacts.) Conclusion:
This is a great phone for those who love to message others wirelessly since it has a QWERTY keyboard. The phone is also a great improvement to the enV with a whole new look and a compact design. I wasn’t too fascinated by the maroon color, but I found the black version to look a whole lot better. It does lack some features such as a flash, a lens cover, and auto-focus all for the camera. It also doesn’t yet have a HTML browser. The main complaint I have would have to be the tiny external display, but if you set that aside the rest of the phone is quite impressive. The phone is also quite affordable and will be of interest to many Verizon Wireless customers looking for a new phone. The phone is now available on Verizon’s website and in Verizon Wireless stores for $130 after a $50 rebate and 2 year contract.