Skatter Tech recently got a hold of Sony’s NWZ-S610 Video Walkman to review and we have been messing around with it for a few days. We’ve got to say that Sony should be proud since they have finally taken a big step by launching Video Walkmans which are also “open format.” (Means support for most DRM-Free music formats.) If they keep up the pace, this could help them regain their market share in the portable media sector. Getting back to the review, since this was Sony’s first Walkman in the U.S. that can playback video and the first to be “open format,” we weren’t expecting too much. As we got more into the player’s features and capabilities, we were surprisingly impressed with what Sony has turned out. Just to heat things up, we’ll even go as far to say that we’d recommend this over Apple’s new iPod Nano!

The Body: – 3.5/5
The S610’s body is simple and elegant, but not eye-catching. The unit is quite durable and wouldn’t be easy to break. The Walkman is just 3.25 inches tall, 1.7 inches wide, and .45 inches thick, making way sleeker, but thicker and taller than the new iPod Nano. On the front you’ll find the display followed by the navigation controls right below. At first we assumed the four-way commands were touch sensitive, but it ended up that all the controls on the unit are actually hard keys. The ‘back’ and ‘option’ buttons, which are awkwardly placed at the top left and top right, are used to return to the previous menu and bring up an options menu. We felt both these buttons should have been placed elsewhere, but it wasn’t a problem after some getting used to. The ‘play’ button in the center acts as the enter key. I actually prefer hard keys since it is easier to navigate the player without having to be looking at it. The hold key can be found on the left side and the volume controls are on the right. Other than that the stereo headphone jack can be found on the top of the unit while the data port for syncing and a reset pinhole are on the bottom. 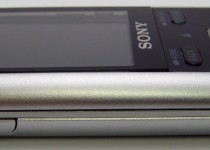 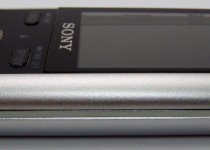 The Screen: – 5/5
The 1.8-inch display, just .2 inches smaller than the Nano, is surprisingly bright and sharp enough to watch videos on. The resolution is a standard 320 x 240 and plays at 30FPS. We didn’t notice any lag or audio/video sync issues and the screen didn’t go dark when viewed at from angles as it does on many portable players. Instead of making the S610 “fat” like the new Nano, to retain the form factor the screen has instead been placed on the unit vertically. This of course means to utilize the entire display, the unit must be held sideways when watching videos. To make the unit friendly to left and right handed owners, the video and photo orientation can be set in the options to rotate to the preferred side.

Battery Life: – 5/5
Sony’s always been on top of things when it comes to battery life. My 3-year-old thumbdrive sized Walkman often lasts up to 50 hours. In the case of the S610, it supposedly lasts up to 33 hours for music playback and an amazing 9.5 hours for video playback. This of course depends on many factors including volume level, screen brightness, file sizes, and plenty more. Either way that’s quite good considering that the new iPod Nano is limited to approximately 24 hours of audio and 5 hours of video.

Media Formats: – 5/5
As we mentioned in the intro, Sony has finally gone “open format” with this Walkman and two others. They have dumped Sonic Stage, the Connect music store, and even the ATRAC format. For music, the S610 now supports MP3, AAC, WMA, and WAV all of which have to be free of DRM. The player is also compatible with Napster’s Subscription Based service and iTunes Plus tracks. As for video, the S610 will playback MP4 formats encoded in H.264/AVC and AAC. This part was a bit disappointing since they don’t exactly offer much leniency onto other formats. It even got worse when we realized that they hadn’t included any conversion tools, specify where to download samples, or to know exactly what is supported. This wasn’t an issue for us since we’ve got tools to re-encode videos, however some one-click conversion tool like the one in iTunes should be included for general consumers. We also found that all the Movie Trailers we downloaded which were encoded for iPods on iTunes worked just perfectly. Finally for the part people almost never use, photos, the unit has been limited only to JPEG. Interface: – 4/5
We were quite pleased with the interface as not only looked fancy, but was also clean and quick. The learning curve is short, only requiring a few minutes to master. The Walkman has even got some neat features such as holding the ‘back’ key will take you back to the main menu and the ‘option’ key will power down the Walkman. Music can be surfed through by Album, Artist, Genre, Year, or in a long list of All Songs. Photos will appear in a simple folder layout just as they are copied onto the unit. Videos on the other hand will appear in a straightforward single list with thumbnails. The Now Playing screen displays standard song data plus Album Art. In addition to the standard Shuffle, Sony has added an interesting “Time Machine” Shuffle now randomly selects a year and plays songs within it. A search feature, which only works for music, can be found in the main menu, however was quite disappointing since it only lets users search for the starting alphabet of an Album, Artist or Song. The settings menu were pretty clear-cut, offering equalizer, volume limiting, and playback mode settings for music, slideshow interval settings for photos, and orientation plus brightness options for videos.

FM Radio: – 4.5/5
The quality of the built in radio was strikingly good. It has been hard wired and coded into the unit and isn’t just an extra add-on. Browsing through channels was both smooth and quick. The Walkman utilizes the plugged in headphones as an antenna to gain better signal. Users can save their favorite stations into any of the 30 available presets by simply holding down the “play” key. 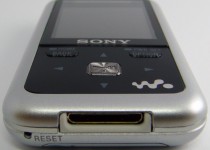 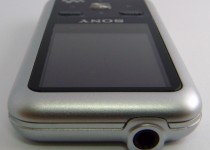 Syncing Media: – 5/5
Transferring data to the NWZ-S610 was a cinch. We didn’t have to deal with any drivers or compatibility issues, both my Vista and XP machines detected and self-configured the device automatically after connecting the USB cable. Since the unit is “Play For Sure” it works with Windows Media Player 11. We had no issue copying songs over and received no errors. Since the songs are DRM-Free the unit isn’t limited to just a few “licensed machines” as iPods are. Songs can be taken from one machine and a friend can easily copy, add or remove your files. We didn’t have a chance to test the unit on a Mac OS X computer and Sony doesn’t mention anything about it. We’re going to assume that if a Mac is able to recognize the unit as a mass storage device there shouldn’t be any problems since the Walkman automatically creates Music, Picture, and Video folders, which can be seen when the drive folder is opened. When compatible media is copied into the corresponding folders, the Walkman will automatically index them after being disconnected, and the items will appear in the interface.

In The Box: – 3.5/5
Other than the S610 Walkman, Sony bundles a pair of stereo headphones, a USB cable, a dock adapter, and a Quick Start guide. For such a great Walkman we were very disappointed to see how poor of quality the included headphones were. If you purchase this Walkman or even an iPod for that matter, we suggest upgrading to the Shure SE110 or SE210. Anyways, back to the box, a CD with Windows Media Player 11, Napster (trial), and a MP3 Conversion Tool (based off SonicStage) was also included. Overall we give Sony’s Video Walkman a BIG THUMBS UP! Even though some work still needs to be done around the video part, I was satisfied to see that they have finally dumped DRM which was holding them back. I will bet that if they continue to keep their players open to a variety of content, they will be able to boost their sales. As we mentioned the video codecs are a bit limited, but most iPod formatted content should work. This should also be resolved possibly with a firmware update or when they launch a second generation Video Walkman. As for this one, it is available online and in stores as of this month and is very reasonably priced at $99, $129, and $179 for 2GB, 4GB, and 8GB. Exactly $20 cheaper than each of the new iPod Nanos of the corresponding size capacities. We recommend this Sony Walkman to anyone who is finally willing to give iPods a break, wants to be free from DRM, likes occasionally listen to the radio, and is looking for a cheaper unique product which everyone else doesn’t have.

Important Note: The unit which was provided by Sony and was used for review was the NZW-S616F which held 4GB and was silver.