The HTC Arrive, Sprint’s first Windows Phone 7 device, showed up at my door a few days ago. I have used Microsoft’s new mobile OS several times, but I had not dug into it too much until now. I decided to login to all my accounts and use it as my primary device for a few days. The hardware and software were a surprisingly good mix: a fancy robust body and an interface that scrolls like butter.

The first thing I noticed was the incredible responsiveness. The built-in animations, transitions, and overall polish is pretty impressive considering it is still first-generation. Swiping through the live tiles on the home screen feels faster and smoother than both Android and iOS. For those who have not tried Windows Phone 7, the work flow is very different. Although users still enter and exit applications, the native style inside them is very unique. Rather than a set of tabs the top or bottom to switch between views, users swipe to the left or right to browser through a continuous set of streamlined sections.

I felt the starting portion of the learning curve is a bit steeper than other mobile operating systems, but it begins to make sense after a few days in use. I humorously could not find an option to display the top status bar until I realized a simple downwards gesture makes it appear temporarily. In addition, I had a hard time figuring out how to pause a preview song that was playing in the Marketplace only to realize that a quick up or down tap on the physical volume keys brings up the playback controls. Aside from a few momentary obstacles, I enjoyed the refreshing interface.

I should note that the HTC Arrive also ships with the latest version of Windows Phone 7 which offers copy/paste, support for CDMA networks, performance improvements for apps, and an improved Marketplace search. Only a few devices run this version as of now. 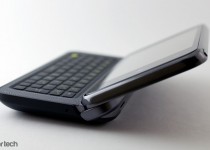 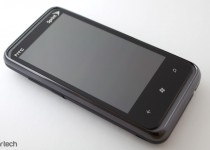 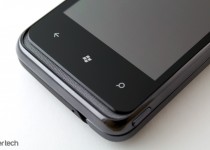 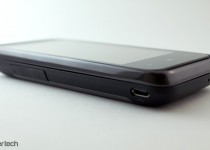 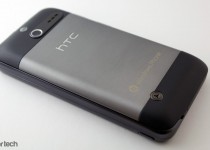 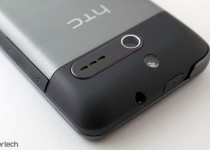 As always, HTC’s engineering is nothing less than awesome. The Arrive is a somewhat heavy phone and is thicker than most devices due to a full QWERTY keyboard that tucks away under the display. It is a trade-off physical keyboard enthusiasts will have to pay. The display also tilts up into a laptop-like form factor, which makes the device great for enjoying videos on the go. The sliding mechanism is pretty strong, but I managed to get it stuck once or twice when exerting too much pressure one side over another. You most definitely need two hands to get it open without letting it slip away.

I listed the a detailed set of specifications for this phone earlier, but here is the quick gist: a 1 GHz processor, a 3.6 inch screen, 5 megapixel camera for 720p video, and 16 GB internal storage. Bluetooth and WiFi are of course standard. There are no dual core processors or even a front facing camera for video chat, but the HTC Arrive still makes a great Windows Phone 7 device.

Titan And Radar: Two Sleek, But Large New Phones From HTC
11 years ago